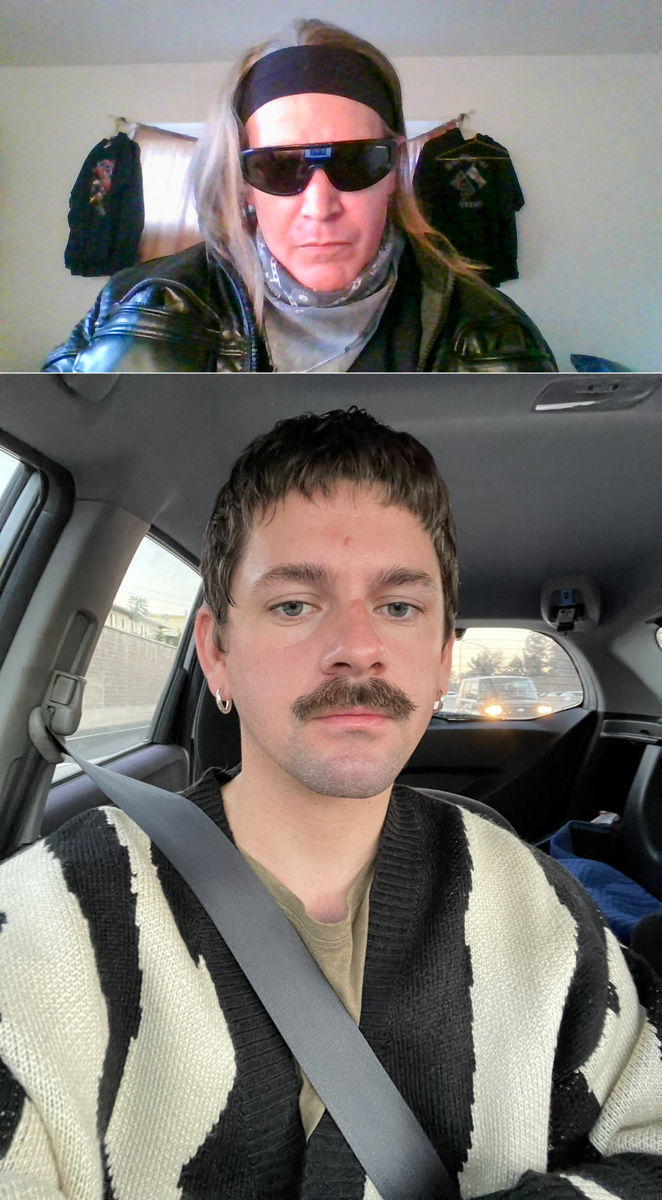 The Perfume Nationalist will necessarily have a final episode. Everything episodic must. The end will occur because, one by one, all of the soldier-redolent boys who hurl themselves olfactorily at Jack will dare to voice a single criticism each. So in turn will other fans. These are all people who… have no reticence to speak their minds.

Jack – with no capacity to tolerate dissent or criticism, even while regaling us of his tales of growing up gay, fat, popular, and well-adjusted (also right about everything) – will block every one of them. After the Ice‑9 manner, soon there will be no one left to block. Jack’s fan base will be as corpses gauzily visible beneath the frozen Thames.

Thus will conclude the Perfume Nationalist – “delivered to an audience of no one, for no reason.”

Our friend Jack the Perfume Nationalist (it’s an eponym that, like Charlie, he has no choice but to wear) is well on his way to blocking, denouncing, unperson(n)ing, and freezing out his entire fan base one at a time.

The same fate will befall any number of Barrets or Barretts, mestizo Brendans, LDS missionaries, tough guys who live for Angel and live out of their cars, and beloved Catholic art podcasters. (I warned the last of those already.)

Jack’s BF unit and that Red Scare lady will reënact the last hours of the Ceaușescus – baffled by the route by which they ended up against a brick wall, about to share quite the black Christmas.

The unstated philosophy of this stated enemy of censorship is “distribute a pre-blocking list.” Soon enough, Jack will run out of other people’s money (reckoned in Patreon memberships).

Joe Rogan’s, Jordan Peterson’s, and our friend Jack the Perfume Nationalist’s. All are Howard Beale–style false prophets of the airwaves. (“Mad prophet” was what Beale was called in Network [q.v.]. I’m not changing my statement.)

I can think of three reasonably obvious methods by which our friend Jack could secure the annual hundred grand or so he would need to liberate himself from his quotidian shackles and become the god-emperor of cinephilic parfumerie he was meant to be. But Jack is like his listeners, and indeed like the listeners of the other two men’s-life-changing podcasts. He, and they, have no ability to monetize their intelligence, a topic so perennial it has its own category here.

I concede that Andrew Tate, whose factotum actually invited me to one of his Eastern Bloc bimbo/cigar retreats, is correct. He who gets rich is he who spends all day thinking about how to get rich. Why am I three steps ahead of Jack there?

Still the only coverage of the Perfume Nationalist

Jack’s lifelong enemies in the military–industrial–entertainment complex have enacted a commensurate lifelong omertà against him. He’ll barely ever even be acknowledged. Jack has nought to complain about there, as he does the same with the kulaks he excommunicates.

I cannot be eliminated. The articles will continue until morale improves.

The ecosystem elliptically orbiting Jack the Perfume Nationalist has become what it beheld – liberals. A crowd of underachievers, these artists’ vice is nothing so déclassé as heroin or as trailer-park as fentanyl. It is psychopathic cruelty.

As I have explained at length over my decades online (a corpus far in excess of anything the TPN demimonde has produced in totum), what I have called downtown progressives decide to inflict opprobrium and ostracism on an unworthy, then justify their mobbing as the very least he deserves.

A downtown progressive is a liberal in Jack’s nomenclature. Like André the Giant, Jack’s got a posse, and I’ve had them mob me the way BLM and antifa (and black guys on the subway) have done.

The art podcaster’s vice is mislabelling an ardent supporter a vexing adversary (in their argot, a “hater”) and pillorying him directly. And, in Jack’s case and his brother’s, passive-aggressively writing me up on Twitter. Jack is ringleader of the tormentors.

These guys are all underachievers. I would expect something resembling class solidarity from a cohort all of which listens to Aimée Thérèse, the fastest talker this side of Eminem.

Of course they’re frustrated. But the scenario here is the same as Jack’s: I’m right about everything, and another thing I’m right about is you guys have decayed into a liberal mob who can’t wait to express the bottomless hatred that springs from the frustrations of your stunted careers.

I don’t initiate shit. I show up pre-blocked on Twitter. (Jack’s lies about forgiveness and generosity in this regard gall still.) On luckier days I can actually talk to these men. One of them hasn’t turned on me yet (Zion is still to fall). The rest have.

In their view (the view of the liberal), I deserve it. I deserve so much more.

The psychopathy of the TPN-adjacent underachiever is far worse than pulling a Heath Ledger and leaving a beautiful corpse. While amassing unique works of art, building them up episodically in formats that can be destroyed in a flash, these wayward manchildren put a whole lot of day-to-day effort into nastiness and cruelty.

This distributed gang warfare by skinnyfat podcasters brandishing Bijan like a sigil is something they’re quite proud of. In their Walter Mitty– or Billy Liar–redolent imaginings, they really would harangue me in person. They really would take it to the next level.

Overall, this is the wrong way to be a tortured artist, and these are life choices you can unmake on a dime. Since that’s how much you’re basically making on what has become your life’s work, take the advice.

Is your first response to this posting to lash out even more?

Now they’re just fucking with me

Jack knows well I have a 330-page handwritten Thirtysomething episode guide and have told him the only episode I would ever want to appear on is that one.

If Camille Paglia ever writes to the Perfume Nationalist, it will have been of my doing

After a second-tier gay podcast actually received a reply E‑mail from Paglia, I assumed that, after 20-odd years of her being online, mailing the professor directly was finally tolerated. (In the olden days, one could not even fax-o-gram Camille Paglia.)

I’m not that acolyte, though I have been a fan since Day 1. I am referring to Texan gay bear Jack Mason, better known as the Perfume Nationalist. For that is the title of his shockingly original podcast, which pairs transgressive or simply ill-appreciated artworks (typically movies) with the one thing middle-class ladies in offices have a “performative allergy” against, perfume.

On seemingly every episode, Jack explains how you were right about everything, and, in interviews, describes how you offer a means of interpreting culture that celebrates beauty and life. You’ll love his diatribes against the 2010s and against liberals, whom he blames for every censorious moral panic we’ve had to live through.

Of course he adores Liz Taylor and soap operas. (The Perfume Nationalist theme song is the one from Knots Landing.) By championing a Live Laugh Love™ philosophy, not only has Jack managed to Pied Piper a flock of beautiful straight guys to his art podcast (all of whom now buy and wear perfume!), he has instigated an entire subgenre of flanker art podcasts, to use a term from the fragrance biz.

There’s nobody like him. And none of it would have happened without you and your œuvre and your moxie. Indeed, his various avatars and user IDs have included your name or face…. (Do drop him a line – it would be the highlight of his day if not year!)

You quite fairly do not appear on podcasts, to the chagrin of impish Soviet-American author Michael Malice, who considers you the biggest possible get. But please allow this fan to suggest that you start listening to the Perfume Nationalist podcast, viz while driving or suchlike. A relevant recent episode unites all these masterpieces by or [e]voking Elizabeth Taylor: Passion, A Streetcar Named Desire, Cat on a Hot Tin Roof, and (wait for it) Boom! and Secret Ceremony.

I will continue to cover TPN

Web sites do not discuss the Perfume Nationalist. Anyone who Googles this signature enterprise in the domain of the art podcast (indeed the progenitor of same) will find my discussion of TPN. Coverage will continue until morale improves.

All the fragrances discussed on the Perfume Nationalist through “Season 2,” starting with the ten most important and proceeding alphabetically thereafter. (Update, 2021.12.15: Season 3 perfumes added; look for ⓷.)

END_OF_DOCUMENT_TOKEN_TO_BE_REPLACED

Originality is overrated and underrated all at once, but the show achieves actual originality by “pairing” a varietal of perfume with one or more movies. Jack’s rejection of neoliberal morality as mere play-acting, particularly by females, is as recognizably gay as his voice, with which he delivers bon mots at breakneck speed. He reminds me of the late Prince of Queens.

He also mispronounces things constantly and just uses the wrong words. His brother, a sound-engineer hobbyist, handles everything technical, and subjects listeners to a sound collage on each episode prefaced by a piercing pure tone, but cannot quite figure out that a filename like 2019_09_04_TPN_s01ep33_Rose_Clouds_
of_Holocaust_w_JUGS_n_Ty_E_TEASER - The Perfume Nationalist is a complete nightmare.

Jack appreciates avant-garde cinema and makes a strong case for the true artistry of works and performers, from Knots Landing to Lens Dunham, derided by bien-pensant lamestream critics. He appreciates Thirtysomething, for which I handwrote a 330-page episode guide, and adores C. Paglia and F. Lebowitz.

So you think we’d get along like a house on fire.